Meridith Baer Home is the premier home staging company in the nation.

Transforming empty listings into finished, fashionable homes, we inspire buyers to bid fast and high. We furnish more than 150 listings per month, many of which sell for up to seven figures over asking!

Our HGTV series Staged to Perfection followed Meridith and our team of designers staging multimillion-dollar homes, bringing the company to international attention.

Widely regarded as best in the industry, MBH has been named Best of Houzz for Design every year since 2014. We’ve also received their Customer Service, Houzz Recommended, and Influencer awards.

We maintain over 300,000 square feet of warehouse space nationwide, housing our vast inventory of furniture, rugs, art, lighting, florals, and accessories. We also design and manufacture our own signature line.

Your space has a story. Meridith Baer Home brings that story to life. 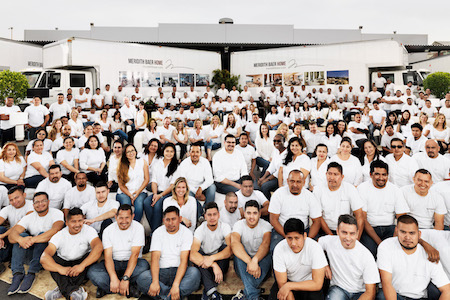 In 1998, Meridith needed somewhere to store her furniture and 250 potted plants after the house she was renting in West Los Angeles was sold out from under her.

A friend’s home had been sitting on market over a year. Meridith convinced her it could finally sell if instead of sitting empty, Meridith “decorated” it with her things, showing buyers exactly how they might live in the space.

Her friend agreed, Meridith decorated, and the house sold just days later to a Hollywood studio executive for $500,000 over asking!

When word got out, other brokers began asking Meridith to stage their properties. Soon, she needed a van and crew to help her, then a team of assistant interior designers. She rented a small warehouse—the old Tootsie Roll factory in Culver City—for her growing inventory of furnishings. The sign on the door read Meridith Baer & Associates.

Before long, Meridith Baer & Associates owned a fleet of moving vans and was generating more than $1M per year in California. The next few years saw a push into luxury housing markets across the country: Connecticut, then New York, then coastal Florida. Initially shipping furniture back and forth, the company soon opened East Coast and Florida offices and warehouses. 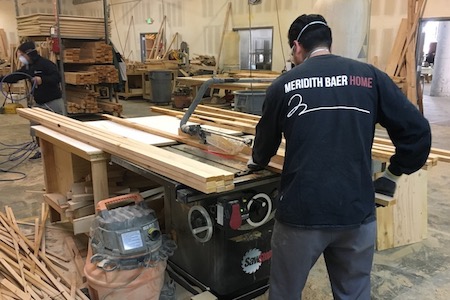 Meanwhile, having outgrown its Culver City headquarters, MB&A moved to a larger space outside downtown Los Angeles. A fleet of newly purchased semi-trucks filled its loading dock as business continued to grow.

In 2012, the company was renamed Meridith Baer Home. A year later, HGTV premiered Staged to Perfection, a docuseries following Meridith and her designers as they staged luxury homes in Los Angeles. Expansion continued on the East Coast into The Hamptons, the West Coast into the San Francisco Bay Area, and internationally, with the company’s first job in Cabo San Lucas.

In addition to staging and designing homes, MBH has also begun furnishing conventions and other events, and developed a signature line of furniture—The Meridith Baer Home Collection.

Meridith and the company look forward to celebrating their 25th anniversary in 2023.